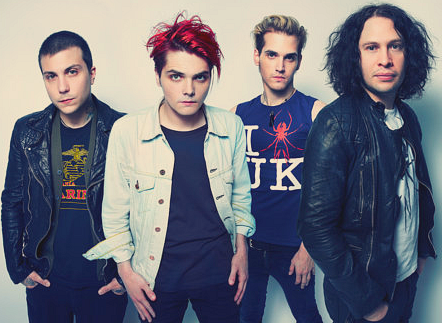 I’m speechless. I’ve never actually been through a band break up before.  In High School, I was primarily fixated on Pink Floyd and The Beatles–but those musical careers were long packed away by the time I started really listening to them.  So I didn’t have to worry about the pain of an artistic split.   On Saturday, I was hit with the news that one of my favorite bands, My Chemical Romance–is no more.

To make matters worse I had to find out through the Facebook fan pages of one of my other idols, LynZ Way.  She sent a tweet out earlier that day stating her opinion on the breakup (which was very sweet –LynZ Way is an angel on earth) I think my brain purposely read the message incorrectly.  At first, I thought she was talking about MSI (Mindless Self Indulgence), then I thought she was talking about Mikey Way leaving the band…but my shock subsided and I realized that MCR had actually parted ways.

I’ll have to admit it, when I tell people that My Chemical Romance is one of my favorite bands… I always brace myself.  I prepare my ego for jabs at my character for being so invested in a dark and emotional band.  I expect jokes cracked based on the hypothesis that I (still) practice self harm, or the assumption that “only 16-year-olds listen to that stuff.”

My Chemical Romance got a bad wrap in the musical bracket being grouped together with stereotypical “emo” bands.  If you actually pay attention to the music they compose and the message they project–you would see that My Chemical Romance is far from the adolescent genre.  They’ve even surpassed the emo fad by maturing as a musical unit with the album Danger Days: The True Lives of the Fabulous Killjoys.  They made the concept album cool again, and The Black Parade carried many angsty teenagers through their High School turmoils.

My Chemical Romance got me through my nervous breakdown in my early 20s.  Gerard Way has become a huge inspiration when it comes to my on stage presence.  Their blend of rock, punk, goth, and glam doesn’t just plant them into one genre of music–which is probably why they match my eclectic personality perfectly.  I will always love Vampires Will Never Hurt You for it’s dark undertones and raw power, and I will always cover I Don’t Love You if  someone is nice enough to accompany me on guitar.

I think the biggest reason why I’m so upset about the My Chemical Romance break up, is because they had such a bright future.  My other favorite band, Muse, seems to be regressing in musical intelligence with each passing album.  (Have you LISTENED to their latest one?)  Whereas MCR only grows more mature and perfects their sound with every album.  Danger Days: The True Lives of the Fabulous Killjoys was the start of My Chemical Romance down a more colorful road.  It sounded as if they were reborn entirely.  Yes, it was MCR– but they’d grown up.  I couldn’t wait for what they had in store for us, but now we’ll never hear it.

I wonder what happened.  Were they unhappy with the direction they were going?  Was there family feuding? *sigh* we may never know.

This site uses Akismet to reduce spam. Learn how your comment data is processed.

Jo Anna Van Thuyne is an actor, comedian and filmmaker from Philadelphia, PA. She graduated from LaSalle University, and spent nearly a decade acting and producing various projects in the Philadelphia area.

She is now living in New York, NY and enrolled at the UCB Training Center and The Penny Templeton Studio. She is best known for her web series Creepy Basement.