I’ve run into a dilemma.  As most of you know, I’ve been spending a majority of my time trying to turn my passions into my career.  While this may seem pretty awesome, it’s actually cut into a majority of my geek time.  It’s ironic when you think about it.  A geek girl trying to make her dreams her day job, while at the same time loosing touch with the culture she loves so much.

I sometimes feel like a complete failure.  My main geek badge lies within the horror genre, but have I seen the reboot of Evil Dead?  Nope.  I didn’t even actively try to make it out to the theateres to see it.  I was too busy either editing the podcast, blogging for clients, or auditioning for other geek related projects.  While everyone else around me was either boasting about how “fucking awesome” it was or how they “hated the fact that it was too serious” all I could do was shrug my shoulders and mutter, “I haven’t seen it yet.”  In fact, the only reason I saw Star Trek Into Darkness was because Geekadelphia got me in for free. (Oh– I’m poor too, guys.)

It’s a miracle that I’m able to keep up with shows like Doctor Who and Game of Thrones.  Although I’ve been known to skip three episodes in a row and catch up all at once.  Does this lower my geek cred?  Or am I just getting to old and too busy to spend my time watching movies and television shows on a regular basis?  I’m immersed in a world that’s so obsessed with pop culture, and knowing absolutely everything as soon as possible.  Is my falling behind making me less of a credible source in the geekosphere? 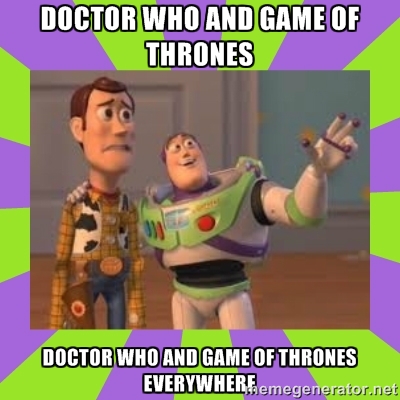 I was one of the last people on this green earth to find out what the Harlem Shake was, and I really don’t have the time (or desire) to hear what Apple was blabbing about in their last Keynote.  Am I sliding?  I’ve lost about 5lbs because I’ve made it a pont to schedule exercise time almost every day.  Do I need to schedule “geek out” time too?  If I have to schedule my mass media intake does that mean my geekdom is just… forced?

Wait a minute.  Geek culture isn’t about consistency and “one upping” one another.

It’s about passion.  I have to remind myself that it doesn’t matter how often you watch a show, or how soon you see a movie.  It doesn’t matter whether or not you’ve read the book, or been keeping up with the rumors online.  What matters is how you feel about the things you absorb.  Geekdom is about the passion you have for the things you love.  I’m reminded of the Simon Pegg quote that I’m sure you’ve seen floating around Tumblr: 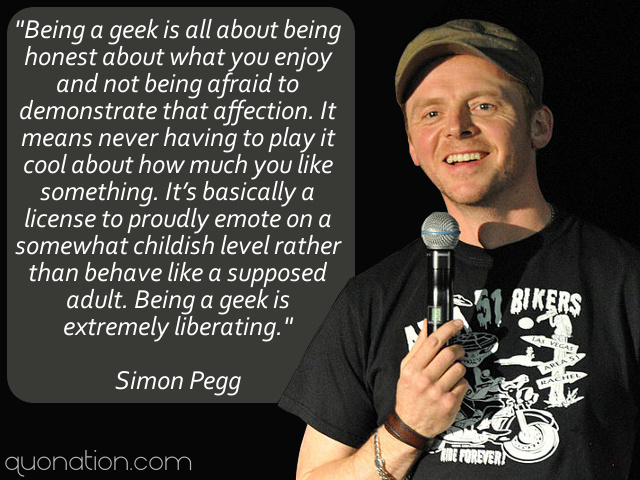 Isn’t he cute?  Anyway. He’s right.  I can honestly say that I haven’t seen X Men First Class, but that doesn’t mean I can’t assume it’s awesome.  I’m sure I’ll get around to seeing the Evil Dead reboot, and I’ll try my hardest to get a cute boy to take me on a date to see Man of Steel.  In the meantime I’ll still get excited when I hear any news on the new season of American Horror Story, and I’ll still dream up cosplay based on moves I loved as a child.  I’ll squeal with delight at the thought of watching Johnny Depp shirtless for the majority of the 120 minutes of The Lone Ranger, and I’ll countdown the days until I can see Machete Kills.

I know my obsessions, and I know what makes me happy.  I don’t need to watch it all at once.  I’ll eventually get to it, and then you’ll never hear me shut up about it.

2 thoughts on “Nerd Dilemma: Too Busy to Geek Out”

This site uses Akismet to reduce spam. Learn how your comment data is processed.

Jo Anna Van Thuyne is an actor, comedian and filmmaker from Philadelphia, PA. She graduated from LaSalle University, and spent nearly a decade acting and producing various projects in the Philadelphia area.

She is now living in New York, NY and enrolled at the UCB Training Center and The Penny Templeton Studio. She is best known for her web series Creepy Basement.